Acid reflux diet: which foods to consume for this gut condition?

Home /Healthy Eating/Acid reflux diet: which foods to consume for this gut condition? 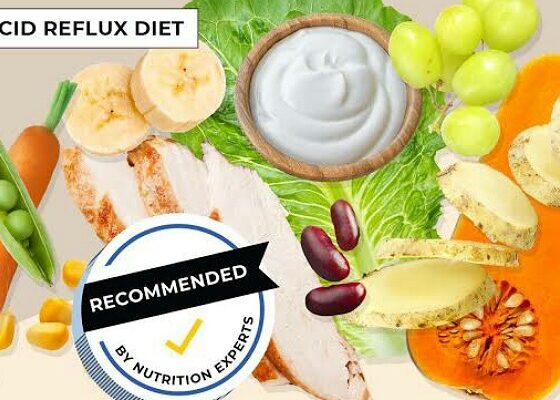 Acid reflux is a condition that affects a significant percentage of the world population. In this, there is regurgitation of food back into the stomach along with the acidic gastric juice. The symptoms are varied in severity. While certain foods increase them, there are other foods that can ameliorate the symptoms. The latter constitute the acid reflux diet.

What is Acid reflux?

The food we eat pass through our gut where it gets digested and absorbed. The residue forms the feces. After we chew and swallow the food, it passes down the first tube of the gut called the esophagus. And from there it enters the stomach. In between the esophagus and the stomach, there is a muscular tissue called the lower esophageal sphincter. And the function of this sphincter is to prevent the food from returning back into the esophagus.

The sphincter acts like a one way valve and prevents the acidic stomach contents from returning to the esophagus. If it does, it might damage the lower esophagus and cause heart burn. This happens when the lower esophageal sphincter due to some reason becomes lax and loose. Thus condition is called acid reflux.

Treatment of this reflux

Doctors prescribe a number of medicines for this condition. They also advise various measures to lessen this problem.

If the patient sits erect, gravity would act and decrease the reflux. Even during sleep, if the patient adopts an angle of 45 degrees this would significantly reduce the reflux. Moreover, the patient should not have late night dinners. There should be a gap of at least two hours between dinner and sleep time. This will allow the stomach contents to empty and reach the small intestines. Thus the reflux chances lessen.

These are short term measures that control but do not cure the disease. Surgery is advisable in severe cases. But diet plays an important role in therapy and prevention. One has to avoid foods that aggravate the problem. And consume foods that offer relief. These form the acid reflux diet.

In the condition of acid reflux, the acid reflux diet helps. This consists of consuming foods that lessen the gastric acid secretion and reduce the reflux. These foods include:

Alkaline foods have pH above 7 and can neutralize the gastric acid and reduce symptoms. These include fruits like bananas and melons, nuts, cauliflower and fennel.

Water rich foods can dilute the acid and bring relief. These include cucumber, celery, lettuce, watermelon, drinks like herbal tea, and soups of broth.

Also, read 8 Foods that cause bloating!

These make one feel full and satiated. Hence overeating is prevented and acid reflux comes down. Foods rich in fiber include whole grains like oats, brown rice, and couscous, root vegetables like sweet potato, beets, carrots, and green vegetables like lettuce, asparagus, green beans, and broccoli. Legumes and beans and lentils also are packed with fiber.