Diet Coke vs Coke Zero: Which is healthier? What are their ingredients?

Home /Healthy Eating/Diet Coke vs Coke Zero: Which is healthier? What are their ingredients? 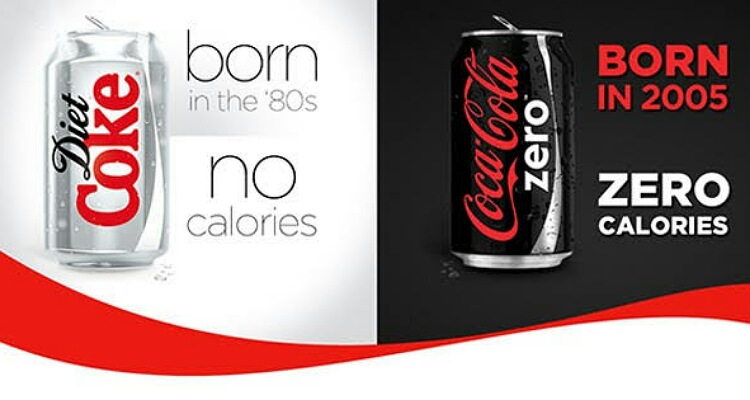 Diet Coke vs Coke Zero! You find both of these on the shelves of the refrigerators in grocery shops, supermarkets, and cafes and restaurants. They have some things in common while there are also some differences between them. Which one should you choose? Know everything about them to make your choice easier the next time you desire to have them.

These two cold soft drinks you will find in most supermarkets and stores as well as in restaurants and cafes. They are caramel-colored, fizzy, caffeinated, and calorie-free concoctions from Coca-Cola company. There are claims that both are good for those who want to slim down and stay fit and healthy.

The UK Coca-Cola website claims that they first introduced Diet Coke in 1983. And Coke Zero came later in 2003. And in 2016, the manufacturers replaced Coke Zero with Coca-Cola Zero Sugar drink. Their website writes:

“Diet Coke has been around since the 80s. It was the Coca‑Cola system’s first sugar free cola and arrived in Great Britain in 1983, where it quickly became one of our most popular drinks with an extremely loyal fan base.”

“Since then, the signature silver and red packaging has become almost as iconic as Coca‑Cola Classic itself. From the infamous ‘Diet Coke break’ TV ads to collaborations with fashion designers like Jean Paul Gaultier and Marc Jacobs to create limited edition bottles and cans – it’s become a real cultural phenomenon over the years.”

“Coca‑Cola Zero Sugar might be newer to the game, but it’s made a name for itself as a sugar free alternative to Coca‑Cola Classic.  It was launched in 2016, with a new and improved taste, after years of innovation and recipe development. It replaced Coca‑Cola Zero, which came out in 2006.”

But how do the two fare in their ingredients? Diet Coke vs Coke Zero: which is healthier and therefore better?

According to the website of Taste of Home, Coca-Cola Zero sugar is sweeter and smoother than Diet Coke. They add that Diet Coke has citric acid in it but Coca-Cola Zero Sugar lacks this ingredient.

As per Tasting Table, Diet Coke has more caffeine content in it compared to Coca-Cola Zero Sugar. In a 12-ounce can of the drink, there is 46 mg caffeine in Diet Coke and 34 mg caffeine in Coke Zero. But the website states that both drinks are unhealthy.

Which is relatively better?

Diet Coke has carbonated water in it along with colour (Caramel E150d) with phosphoric Acid, sweeteners that include aspartame, acesulfame K), and natural flavourings including caffeine, acidity regulator (Sodium citrate) and a source of phenylalanine. And Coca-Cola Zero Sugar has almost similar content. It has the carbonated water, with artificial colour (Caramel E150d), and phosphoric acid along with sweeteners (aspartame, acesulfame-K), natural flavourings, and acidity regulator (Sodium citrates).

The company website claims that both are sugar and calories free. But difference is in taste only. Coca-Cola Zero Sugar had a new and improved taste. It tastes more like the Coca-Cola Classic. But Diet Coke has a lighter taste. The difference is only in the added flavor base.