How To Broil Lobster Tails With Garlic Butter Sauce? 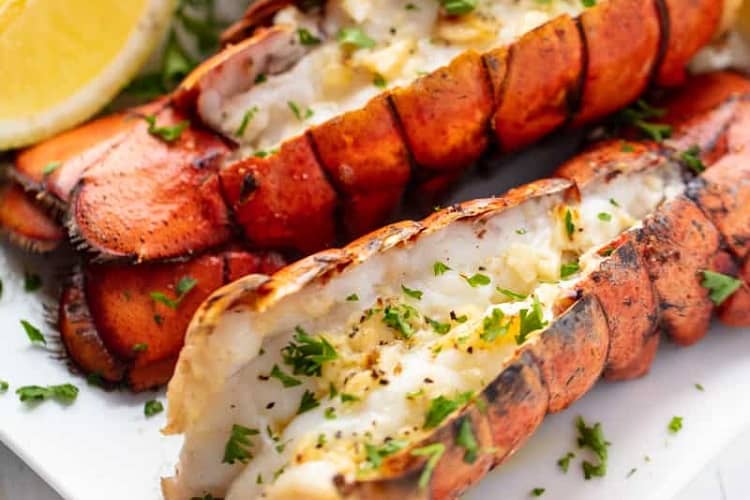 Blog,Dinner,Healthy Eating |
- Rate us if you are a Food Lover (Sugarzam.com)

Butterflied lobster tails, parsley, and a lemon slice on a dish next to a wooden bowl with garlic butter dipping sauce
Is there any cuisine that screams luxury like lobster?

Okay, so that $700 jar of caviar might scream it, but what about me? Lobster is often associated with memorable feasts, such as Valentine’s Day or a significant anniversary (But probably not that year 2 anniversary).

However, in my humble opinion, we don’t consume nearly enough lobster.

And, yes, eating lobster in a restaurant can be quite costly! So create it at home and you’ve solved the problem.

Apart from that, how terrifying do these lobster tails appear? I was always afraid I’d overcook them, and I’d never learned how to butterfly lobster tails.

So I usually skipped it or cooked a tail hastily before pulling out the meat for my husband’s over-the-top mac-and-cheese.

I’m a different person now. Why? I learned how to butterfly lobster tails and broil lobster tails, but what about this garlic butter sauce? Oh, oh, oh That’s not all, though.

The last thing I want to do on a night like Valentine’s Day is a) destroy a relatively expensive piece of seafood or b) spend all day in the kitchen preparing it.

No, for me, the best way to broil lobster tails was to:

There will be no rubbery, overcooked lobster, no labor-intensive techniques, and no tasteless seafood. It has to be perfect if I’m going to reveal my broiling procedure for lobster tails. And there you have it, friends. VWAH-LAH.

What Is the Best Way to Make This Dish?

When it comes to learning how to broil lobster tails and cook them effectively, there are a few basic steps to follow.

Before we get into the how let’s look at why:

It’s all about appearances, really. Lobster tails that have been butterflied look lovely and are also easy to consume.

However, leaving the flesh in the shell results in a somewhat more tasty broiled lobster tail; the shell gives taste and moisture for cooking that you won’t get if you prop the meat up on top of the shell.

You can cook these either butterflied or with the shell cut along the middle but the meat still within; however, if you cook them still in the shell, it may take a minute longer for the meat to become white and opaque.

Then there’s the question of how to butterfly lobster tails.

It’s actually quite simple, despite the fact that it appears to be hard. Start by flipping the tails over and pressing down firmly with your thumbs to break the ribs in between the swimmerets (yes, the little leg-fins are called swimmerets).

I’m going to stop now because you’re going to think lobsters are far too cute to eat.) This aids in the loosening of the meat.

Turn the tail over and cut down the middle of the shell and the top of the meat all the way to the fin with a pair of kitchen shears. Make sure you don’t cut through the fin. It doesn’t matter if you cut the tail first or break the ribs first.

Next, carefully insert your finger between the meat and the shell at the aperture (where the tail meets the body) and release the meat from the shell. Several membranes will almost certainly be broken. There is no need to be concerned.

Lift the flesh up and lay it back down on top of the shell once it is free of the shell (but still attached to the fin). For extra flavor and a greater butterfly lift, place lemon slices underneath the meat.

Replace the meat that has been fanned out on top of the shell.
That concludes our discussion.

Don’t Forget to Include the Sauce!

As described above, butterfly your lobster tails.

Season the meat of the lobster tails with a generous amount of salt and freshly cracked pepper. 4 tablespoons unsalted butter (1/4 cup) sliced into 8 pieces (1/2 tablespoon each) and placed 2 on each tail

Remove from the oven and place on a platter; set aside the baking sheet but do not drain.

To make the garlic butter sauce, follow these steps: 2 tablespoons butter, melted in a small saucepan over medium-low heat Cook, stirring regularly, until the minced garlic is fragrant, about 30 seconds.

Stir in the lemon juice and a bit of salt, then add the melted butter and baking sheet drippings. Whisk everything together thoroughly, then taste and adjust seasonings as needed. To taste, add extra salt or lemon juice.

Drizzle a small amount of garlic butter sauce over the lobster tails and serve with additional sauce for dipping.

Cooking time will vary depending on whether the lobster tails are smaller or larger.

Use 2 tablespoons ghee instead of butter in the sauce for a Whole30 version. Before broiling, dot butterflied lobster tails with two 1/2 tablespoon dollops of ghee. It’s better to use solid, smooth ghee like 4th & Heart for this.

Use a dairy-free “butter” in place of butter in both the lobster tail seasoning and the garlic butter sauce for a dairy-free alternative.