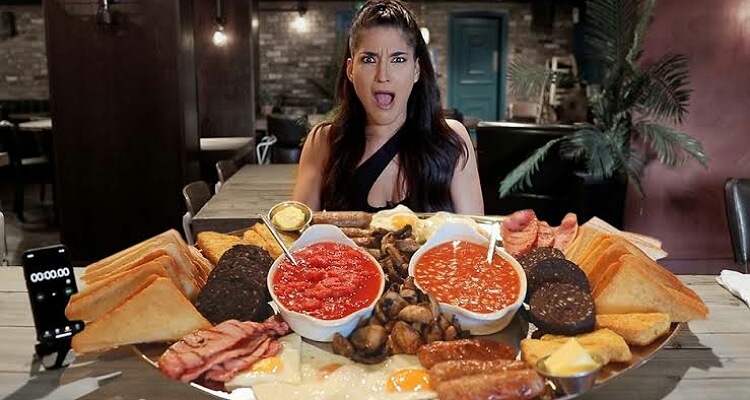 Healthy eating should be the rule that everyone follows. But humans like to have fun, enjoyment, and sense of achievements with foods.

There are competitive eaters who bet on eating inedible foods or eating the largest quantity of food in a specific time. Leah Shutkever is a British competitive eater who has broken several Guinness world records in food eating.

Leah Shutkever, the competitive eater from the UK

Birmingham-born Leah Shutkever has several Guinness book world titles on her name in competitive eating. She has won the Bicester Bean’s huge food challenge in June 2022.

And what was this challenge? In it, she had to gobble down a huge breakfast in the minimum time. And Leah consumed 8000 calories of breakfast foods in a span of just 8 minutes.

Over and above this, she had five pieces of toast with five portions each of of beans and mushrooms.

The female competitive eater broke the record for eating fastest. Just 2 weeks back, Oxfordshire Cafe in the UK had set a record of eating same amount of food in 12 minutes and 50 seconds.

That record now stands broken since Leah consumed the same amount of food in a mere 8 minutes and 2 seconds. Leah is a social media star on YouTube. She admitted after breaking the record:

“The previous record was so good it made me nervous – I really wanted to beat it.”

“It was a difficult challenge for the time scale that I had to eat it in – it was a huge bowl and there were a lot of beans!”

“It certainly wasn’t the biggest I’ve done – but it was challenging.”

“I once did a 41 piece mega breakfast that was absolutely enormous – but it’s all part of the job!”

Aly Clifton who owns the restaurant where Leah ate said she was shocked on how fast the food disappeared from Leah’s full plate. She praised Leah for her talent, quickness, slimness, and lovely personality. She felt that she made it appear so easy.

Read more: Voices against dog eating practice in South Korea get stronger! Is it healthy?

The other eating challenges that Leah won were eating 20 chicken nuggets in one minute, and finishing a whole Terry’s Chocolate Orange in 57 seconds.

Leah does daily exercises. She has been in this profession of competitive eating since the last two years.

Her brother and herself are big eaters in the family. Her brother used to come home disappointed after failing an eating challenge. She decided to have a go at it and won. Leah revealed:

“So, I decided to try one of the challenges he couldn’t complete – a massive dessert challenge – and I set a ridiculous record of six minutes.

“The challenge had been undefeated until I did it and I can assure you I was as surprised as everyone else.”

She wants to avoid making this her full time job.