Heidi Montag and her raw animal meat diet to get pregnant!

Home /Healthy Eating/Heidi Montag and her raw animal meat diet to get pregnant! 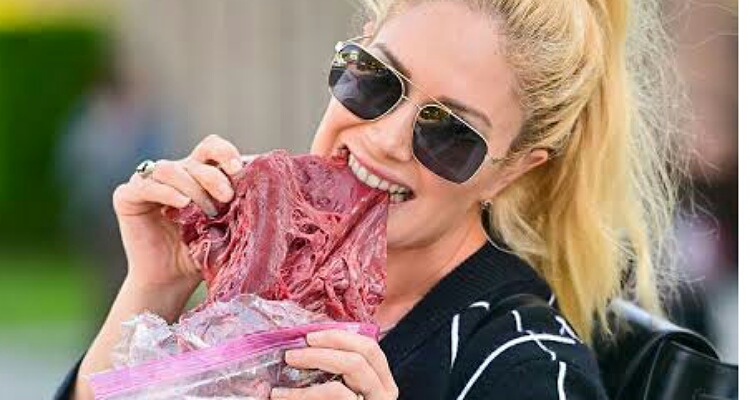 But is eating a raw meat diet good? Are there any benefits? How safe is it?

Page Six put up on their website and also on social media pictures of Heidi enjoying raw meat taken directly out of the Ziploc bag in Los Angeles, California. They tweeted:

She was eating raw bison heart. Probably Heidi got this idea after reading about the carnivore diet of Paul Saladino. His LinkedIn profile has this description:

“A proud tribesman of the growing carnivore community”

“Host of the Fundamental Health podcast”

“When you think about where the most nutrients are that are bio available to humans without toxins. Organs are very nutritious parts of animals. Culturally organs are a critical part. Eating raw liver is going to preserve as many nutrients as possible.”

Heidi wants to conceive with this diet

People magazine has reported that Heidi wants to conceive a baby. Hence to make this possible and increase her fertility, she is on a raw meat diet. Heidi had said:

“I have been trying to get pregnant for over a year and a half, I’m willing to try different things. It’s a great source of nutrients! I have felt incredible on this diet. A lot more energy, clarity, increased libido, and overall improvement on chronic pain I have had.”

Earlier, Heidi had uploaded on her Instagram her pics chomping on the raw liver and also the bull’s testicles.

Animal fat has high protein and is rich in iodine, iron, zinc, vitamin B12, and essential fatty acids. It has minimal sugar or simple carbs.

Carnitine, L-arginine, and zinc in the meat enhance blood flow to body organs including the sex organs. Hence it improves sex life.

The disadvantage of raw animal meat

But this raw animal meat has high levels of saturated fats, sodium, and also cholesterol.

And the minerals, fiber, vitamins antioxidants of plant foods are absent in them. And sometimes the protein is more, can overwhelm the kidneys.

There is no scientific evidence to back the claim that raw meat can help a woman to conceive or increase her sex life. Besides being ineffective, raw meat can have other issues as well.

Cooking kills bacteria. Therefore raw meat can have harmful bugs such as Clostridium perfringens, Salmonella, E.Coli, Listeria monocytogenes, and Campylobacter. They also contain some parasites that are difficult to treat.

Read more: What is a climatarian diet? Is it ideal and healthy?

Hence it is not a good idea to consume raw animal meats to increase fertility or get pregnant. Eat wholesome and balanced and seek medical assistance for infertility.