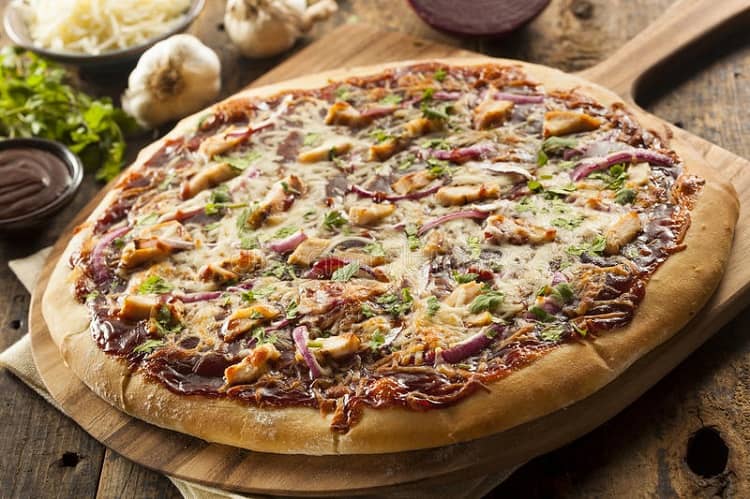 Because it’s almost Friday, I’m going to give you a simple pizza recipe!

But, after working in the pizza industry for a few years, I’ve discovered that there are a plethora of additional tasty toppings for a BBQ Chicken Pizza! So read on for the “traditional” recipe, as well as some of my additional “fun” toppings that go great with these BBQ flavors.

WHAT KIND OF PIZZA DOUGH SHOULD I USE?

BBQ Chicken Pizza can be made with almost any style of pizza dough or crust.

I used my tried-and-true Homemade Pizza Dough, but it would also work on a Thin and Crispy Pizza Crust, French Bread, a baked tortilla, or your favorite gluten-free or cauliflower crust from the supermarket. For a 14-16′′ pizza crust, the toppings suggested below will suffice.

CAN THE CHICKEN BE SUBSTITUTED?

Sure! If you don’t want to use chicken, a can of black beans (combined with the spices and sauce listed for the chicken) or even shrimp can be used instead.

You can use pre-cooked chicken if you enjoy chicken but don’t want to make it from scratch.

I’m not particular when it comes to BBQ sauce, but I do prefer Sweet Baby Ray’s. Personally, I prefer smokey barbecue sauces to sweeter sauces.

I had this Kroger Hickory Smoke BBQ Sauce today. I think a hotter BBQ sauce, or perhaps a pineapple-flavored BBQ sauce, would be interesting to explore.

WHAT ELSE CAN YOU PUT ON BBQ CHICKEN PIZZA?

This is when things start to get interesting. Over the years, I’ve tried a variety of various toppings on my BBQ Chicken Pizzas:

Get the famous BBQ Chicken Pizza recipe, as well as other fun toppings that go well with BBQ and enhance the flavor of your pizza.

*Instead of cooking fresh chicken, season pre-cooked chicken, such as rotisserie chicken or canned chicken breasts.

Enjoy by slicing it into 8 pieces.