How to make Cinnamon Rolls? (Soft, Gooey and Easy to make) 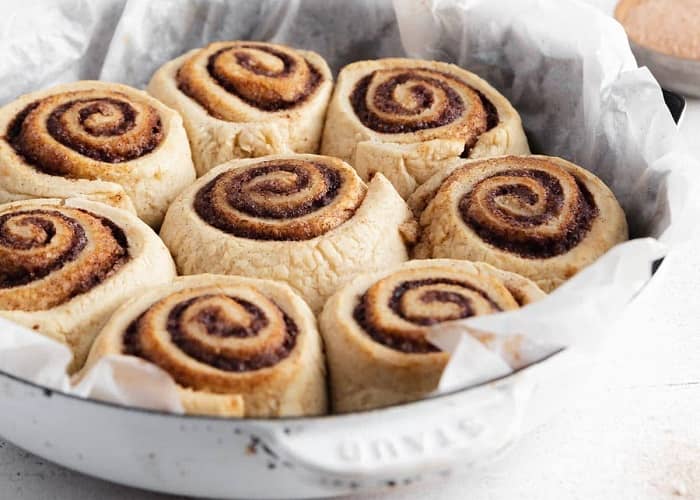 Blog,Breakfast,Dessert |
- Rate us if you are a Food Lover (Sugarzam.com)

Every year around the holidays, I prepare these handmade cinnamon rolls. They’re always a success with family and friends because they’re soft, gooey, and simple to make!

My family used to have cinnamon rolls for breakfast on Christmas morning when I was a kid.

They were simple to bake while my sister and I unwrapped gifts, and they were delicious – gooey, squishy, and coated in creamy cream cheese icing.

My Christmas morning excitement as an adult is no longer based on the gifts under the tree. I’m looking forward to spending some quality time with my family, and cinnamon rolls still seem like the ideal way to start.

Every year around the holidays, I make this cinnamon roll recipe. It’s quite simple, and the handmade cinnamon rolls are far superior to store-bought versions.

They’re soft and gooey all the way through, with plenty of brown sugar and cinnamon. The perfect sweet finishing touch is a generous slathering of vanilla glaze.

Make these for any occasion, a relaxing weekend brunch, or whenever you’re in the mood for something sweet!

How to Make Them?

My cinnamon roll recipe is easy to create; it only requires common cupboard ingredients and doesn’t require the use of a stand mixer. This is how it works:

Make the dough first. I wanted my cinnamon roll recipe to be dairy-free, so instead of melted butter and cow’s milk, I used coconut oil and almond milk in the dough. These vegan cinnamon rolls are just as rich and delicious as traditional cinnamon buns.

Knead the dough after you’ve mixed it all together. The dough will be sticky and elastic at this point. Knead it until it is smooth on a lightly floured surface.

After that, roll it into a ball and set it in a big greased bowl. Cover the bowl with plastic wrap and set aside for one hour, or until the dough has doubled in size.

Then it’s time to go rolling! Roll out the dough onto a lightly floured board into a large rectangle with a rolling pin.

It’s not necessary for this shape to be precise, but the straighter the edges are, the more uniform your cinnamon rolls will be. Brush the rectangle with coconut oil and sprinkle it with brown sugar and cinnamon, leaving a border all the way around.

Then roll once more! Roll the dough tightly into a log, starting at the short end of the rectangle.

Slice the dough into 12 even rolls once it’s been rolled up. Place them cut-side up in a large oiled baking pan. Cover the rolls and put them aside for another hour to rise.

Finally, bake the cinnamon rolls for 25-30 minutes at 350°F, or until softly golden brown. Allow them to cool for 10 minutes after taking them out of the oven.

Make the glaze as they cool. The glaze, like the rolls, is dairy-free! It’s made with almond milk, powdered sugar, and vanilla essence, and it’s delicious. Spread it on the rolls, warm it up, and enjoy!

These handmade cinnamon buns are soft and gooey, and they’re wonderful for the holidays or any weekend brunch!