How to make Gazpacho? (Bursting with Fresh Flavors) 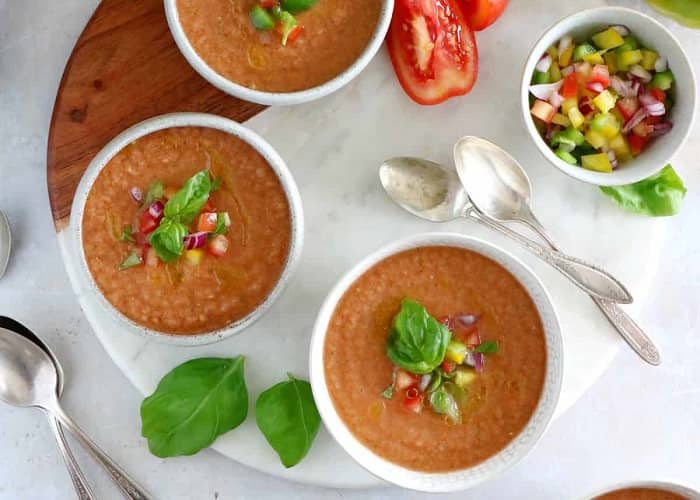 Gazpacho! Andalusia, Spain’s chilled, raw tomato and vegetable soup. Have you ever had it? Do you like it? Do you despise it? I haven’t always been a fan of gazpacho, but when done correctly, it can be delicious.

Gazpacho, at its best, is very refreshing and full of summer flavors straight from the garden. Gazpacho, at its worst, tastes like chunky cold salsa or thin tomato juice, neither of which I prefer.

I wanted a texture that was somewhere in the middle of the two, with a far better flavor. I realized that blending half of the components into creamy oblivion is the key.

Then add the remaining half and blitz until they’re all broken up into tiny pieces. You’ll have a lovely, thick base with little bits of tomato, cucumber, and pepper for added interest.

I added a Vidalia onion to the mix to boost the flavor even further. Vidalias are grown only in 20 designated counties in South Georgia; they are not grown in Spain.

The mellow, sweet flavor comes from the warm winters and low sulfur soil, and it works well in everything from onion dip to dessert. Dessert, of course!

Because Vidalia onions are only available in the spring and summer (from April to August), they appeared ideal for gazpacho.

Other forms of raw onion are too harsh to let the other tastes show through in gazpacho, which is a raw soup. This is the gazpacho of your dreams, created with red, luscious, juicy summer tomatoes.

This recipe has a traditional gazpacho flavor. You’ll need the following ingredients to prepare it:

Tips for Making the Best Gazpacho

Remove the bread from the equation.

White bread is used in traditional gazpacho for the body, but I found that it diluted the flavor. After that, I didn’t like filtering the gazpacho through a fine sieve.

No sieve is necessary when blending the fruit with olive oil to create a thick, creamy emulsion with plenty of substance.

As a result, thanks to the unfiltered vegetables, this simple gazpacho recipe is gluten-free and high in fiber.

Blend everything at once if you’re in a hurry or want a smooth gazpacho (see the recipe notes for details on this shortcut).

I want my gazpacho to have some texture to it. That’s why, rather than mixing everything at once, the recipe directs you to blitz some of the components into the soup for a few seconds.

A couple of hours in the refrigerator is required for all good gazpachos. This allows the flavors to fully develop and the soup to chill.

Chop some of the ingredients and set them aside for garnishing the soup later (see steps 1 and 2). It’s an extra step, but it’s well worth it if you want the gorgeous gazpacho seen here.

This recipe for gazpacho is fantastic! It’s a cool summer soup that’s excellent for using up your garden tomatoes and cucumbers. Make it ahead of time so that the soup may chill for at least 2 hours. The recipe makes 5 cups, which is enough for 4 serves.