How to make Loaded Potato Skins? (Crispy, Creamy and Perfect for Parties) 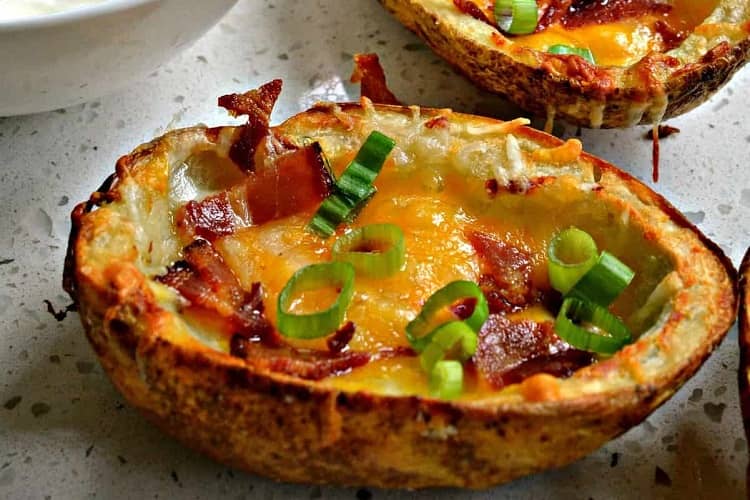 Even though we don’t watch a lot of football, I wanted to share this entertaining healthier “game day” recipe before the Super Bowl.

And I mostly mean me when I say “us.” Jack will watch a game at a party in a social capacity, but my relationship with football didn’t exactly get off to the best… start.

Every year in gym class since the first grade, we have begun the year with a written test on football.

What a great way to pique kids’ sports interests! Every year I would bring home a failing grade and a form that my mother would have to sign from the teacher asking me to bring home worksheets to study (which I never did).

Every year, as I approached my mother, I would be feeling bad (though not awful enough to study the following year! ), but she would always cheer me up by commenting on how absurd it was that we had a written test on football while she signed my poorly completed worksheet.

Sporty cuisine prepared more healthily has my support, even though I’m still unclear about the game’s regulations or the players. Therefore, let’s discuss potatoes!

Jack practically forced me to roast russet potatoes for this dish to achieve the traditional crispy potato peel. I usually stick to sweet potatoes.

But don’t worry, I filled them with incredibly unclassical items. There are a few ingredients in this dish, but you may prepare most of them ahead of time.

I used sunflower seeds to create a “sour cream.” Because it is also a substitute for any cheese, it is tasty, creamy, and tangy, which we need on these potatoes.

If you have any leftovers, use them as a topping for burrito bowls, a dip for vegetables, or tacos. It’s a delightful, creamy condiment to have on hand and it keeps for a few days in the fridge.

Next, what? Coconut ham! Although it’s really simple to make, it’s preferable to prepare this ahead of time because your oven will be roasting the potatoes.

Fortunately, it’s rather simple. Tamari, smoked paprika, maple syrup, and coconut flakes are all you need. You could add liquid smoke if you’d like, but I don’t because I don’t keep it on hand and the smoked paprika has enough smokey taste.

Black beans, (frozen) corn, red onion, chili powder, lime juice, and cilantro are the main ingredients in the filling. This salad is delicious on its own, but we’re stuffing it into these potatoes today.

In the last stage? Serve after assembling into crispy potatoes!