How to make Pumpkin Pudding? (Rich and Crunchy Flavor) 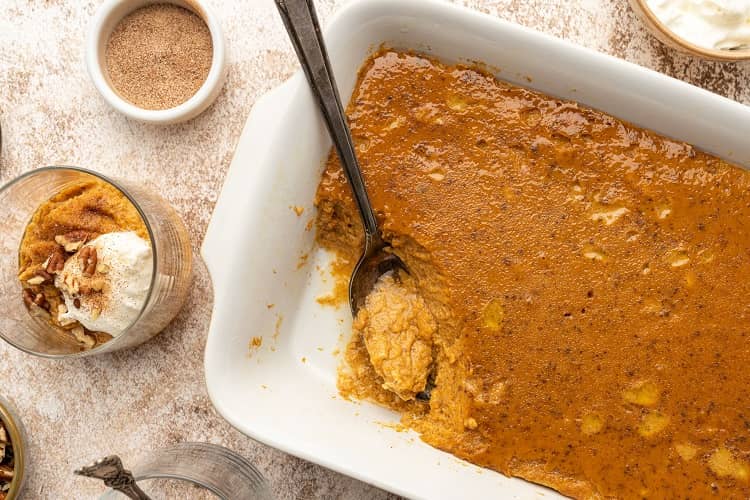 Blog,Dessert |
- Rate us if you are a Food Lover (Sugarzam.com)

Although this pumpkin pudding recipe is much simpler than pumpkin pie, it still tastes great! To give it, even more, richness and crunch, I like to serve it with toasted pecans.

My adult adaptation of the pumpkin pie I enjoyed as a child is this pumpkin pudding. Back then, pumpkin pie was without a doubt my favorite Thanksgiving food. or, more precisely, the filling for pumpkin pie.

Being the finicky eaters that we were, my sister and I would scoop out the creamy pumpkin center and discard the crust shells.

The older people would scoff. I would occasionally eat the crisp edge, but what about the soggy bottom crust? Thanks, but no. Even though I’m an adult, I still love the crust of pumpkin pie, but the creamy filling is still my favorite component.

With this recipe for pumpkin pudding, I can satisfy my seasonal craving for a strongly spiced pumpkin custard without having to go through the difficulty of preparing the pie crust. How ideal is that!?

Although this pudding isn’t a typical Thanksgiving dessert, I hope you’ll give it a try. With warm autumnal flavors like maple, vanilla, and cinnamon, it is incredibly rich and creamy. If you’re anything like me, it’ll be difficult to stop yourself from eating it all right out of the blender!

There are two variations of this pumpkin pudding dish, and they were both so delicious that I had trouble picking a favorite! You’ll need a high-speed blender to make one of the pudding mixtures since cashews and coconut milk give it its creamy texture.

The second recipe may be made with any blender or food processor and includes almond butter and coconut cream.

These essential components give both varieties of the pumpkin pudding their sweetness, flavor, and, well, pumpkin-ness:

The ingredients for either the cashew or the almond butter option should be blended. Then, transfer the pumpkin mixture to a sizable bowl and chill it for at least 4 hours or overnight. I’m done now!

Although you could easily eat this pumpkin pudding on its own, I prefer to serve it in these adorable tiny parfaits. For added richness and crunch, I sprinkle toasted pecans on the bottom.

After adding the pudding, I top it with a dollop of coconut whipped cream. Change them up by replacing the pecans with homemade granola or by sprinkling cinnamon on top.

Serve the pumpkin pudding in parfait glasses or any other small serving dishes you choose if you don’t have jars like these.

Even though this creamy pumpkin pudding recipe is simpler than pie, it still tastes great. To add even more richness and crunch, I prefer to serve it on top of a bed of toasted pecans.