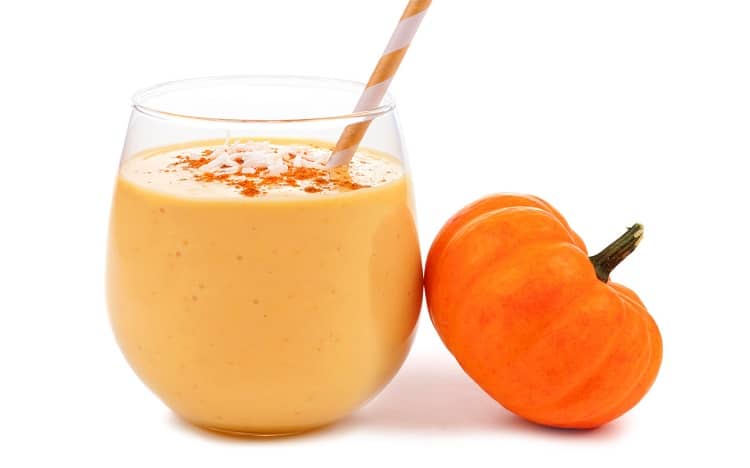 Ten years ago, this pumpkin smoothie was one of my first attempts at using pumpkin purée.

“Hey, can I put this in my smoothie?” I wondered since I had some leftover pumpkin from another dish. Yes, Beth, you certainly can. It will also have the flavor of a pumpkin pie milkshake.

This is the pumpkin drink I want to be drinking instead of the PSL. Especially if you reside in the south, where the temperature is still in the 80s in October.

PUMPKIN SMOOTHIE: WHAT’S IN IT?

Pumpkin purée, frozen banana, ground flaxseed, pumpkin pie spice, milk, sweetener of choice, and vanilla extract are just a few of the ingredients for this smoothie.

The smoothie has an ice cream-like smoothness, and the ground flaxseed almost tastes like a graham cracker crust has been incorporated directly into the drink. It’s truly enchanting.

CHOOSE YOUR CHOICE OF MILK

I chose whole milk because it’s the richest and creamiest, but any non-dairy milk alternative can be substituted. If your non-dairy milk is already sweetened or flavored with vanilla, you can skip the vanilla extract and reduce the added sweetness.

The nicest part about creating your own smoothie is that you may use any type of sugar or sugar alternative you desire.

Brown sugar has a deep flavor that makes the smoothie even more pie-like, but you may use honey, white sugar, agave, stevia, or whatever sweetener you choose.

Although the frozen banana provides some sweetness on its own, I found that the addition of a little sweetness made a significant impact.

SPICE FOR A PUMPKIN PIE

If you don’t have store-bought pumpkin pie spice, you can make your own here, or just use 1/4 teaspoons cinnamon. Because it’s such a minor portion of the smoothie, it won’t make or break it.

Forget the pumpkin spice latte; this pumpkin smoothie should be the official October beverage. It’s quick and simple to make, and it tastes just like a pumpkin pie milkshake!

*Use any milk and sweetener you choose.