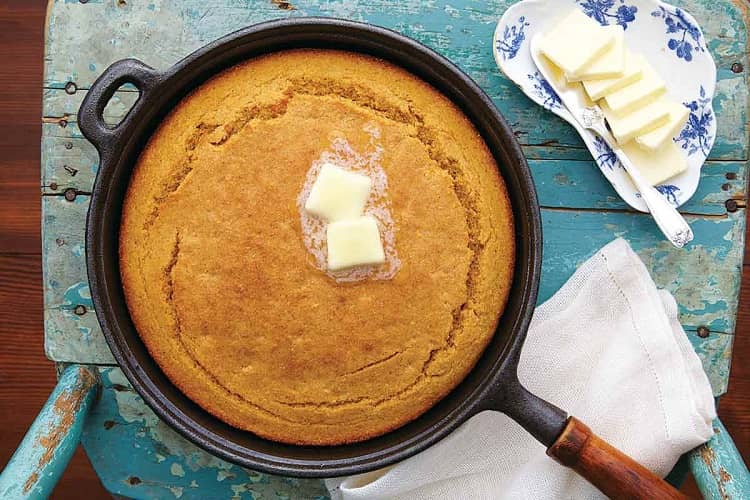 Put a stop to everything. This is crucial. I knew I liked cornbread, but I didn’t realize how much.

I decided to add sweet potato mash to my Everyday Cornbread, along with a few spices and sour cream for richness, and it was… WOW. It took everything I had not to consume this Sweet Potato Cornbread in its entirety.

This recipe is a cross between my Everyday Cornbread and the New York Times’ Sweet Potato Cornbread Muffins.

The addition of cinnamon and nutmeg suggested by the New York Times was dead on and gave the cornbread a wonderful scent.

I chose to incorporate sour cream into the batter, like this recipe from Leite’s Culinaria, because I had already purchased it for topping my chili.

However, neither of those recipes called for nearly enough sweet potato, so I increased mine to 1.5 cups. I didn’t want to throw away the beautiful sweet potato!

WHAT IS THE TASTE OF SWEET POTATO CORNBREAD?

This cornbread is sweeter than most cornbreads, but it’s balanced out with a healthy dose of warm, aromatic spices to avoid it from becoming too dessert-like.

It goes well with sweet and savory flavors alike. The texture is rich and thick, so just one piece will make a big difference in your meal!

WHERE DO YOU SERVE SWEET POTATO CORNBREAD?

The gentle sweetness of this sweet potato cornbread goes great with the warm spices of a bowl of chili or anything BBQ, like this BBQ Cheddar Baked Chicken, but it’s also great with coffee. I’ve also been eating it in the morning with a fried egg on the side.

WHAT SHOULD I DO WITH THE LEFTOVERS?

Before placing the leftover pieces in a resealable container and keeping them in the refrigerator, make sure the cornbread has completely cooled to room temperature.

This cornbread freezes beautifully! Wrap each piece in plastic or waxed paper before placing them together in an airtight freezer bag or freezer-safe container. You can thaw them at room temperature or in the microwave for a few seconds.

STEP BY STEP INSTRUCTIONS ON HOW TO MAKE SWEET POTATO CORNBREAD