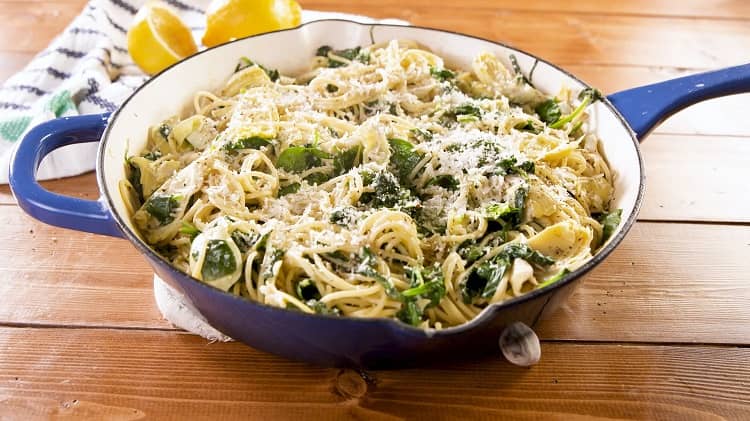 With the one-pot pasta method, I tinkered with the ingredients and came up with this 20-Minute Creamy Spinach Artichoke Pasta.

This creamy spinach artichoke pasta is my favorite because it only requires a few simple ingredients that I always have on hand. There are so many options that it doesn’t feel like you’re eating the same thing every day.

Add 15oz. can of quartered artichoke hearts and some fresh baby spinach to mix this time. The addition of a few dashes of red pepper flakes would make this dish even better for those who enjoy a little heat.

Getting the knack of simmering pasta in milk is a little tough, but once you do, it’s a breeze. There may be a learning curve due to the fact that stovetops and cookware are all unique.

Keep the liquid at a simmer on the lowest heat setting; this is key. Milk will curdle and the pasta will stick to the skillet if you overheat the pan. This sauce can be made in a jiffy if the heat is exactly perfect and you stir every few minutes.

WHAT ABOUT FROSTED SPINACH?

Yes! As a substitute for fresh spinach, you can use frozen. Before adding the spinach to the pasta, allow it to come to room temperature before squeezing out as much moisture as possible (or else your sauce might turn slightly green).

HOW SHOULD I PICK MY ARTICHOKE HEARTS?

For this dish, you can use either oil- or water-packed artichoke hearts. Artichokes that have been marinated in oil and spices can also be used.

That will only enhance the pasta’s flavor! Drain them thoroughly and slice them into smaller pieces, whichever type you choose.

Meatless Monday is made a whole lot easier when you make this creamy spinach artichoke pasta with pantry items!

*To create my broth, I use the Better Than Bouillon concentrate.