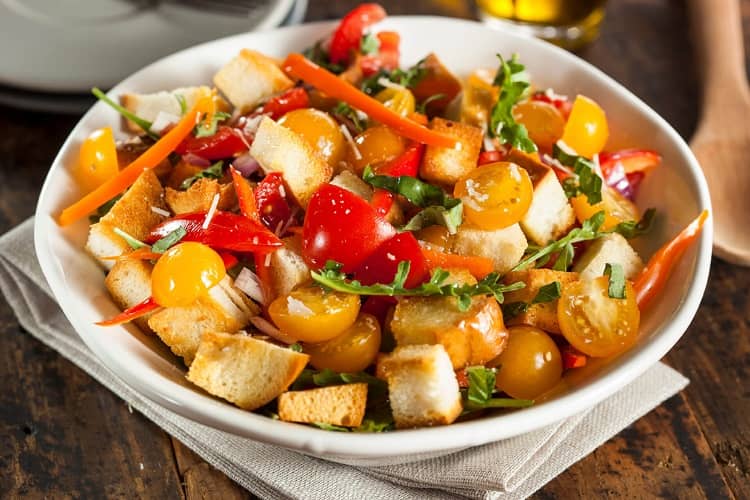 Panzanella is a great way to sneak bread into your diet under the guise of a healthy salad.

The traditional tomato-basil Panzanella has been given a vegetable makeover by me by including blistered sweet peppers, acidic pickled onions, and just a few torn kale leaves.

It all starts with that stale bread that’s been sitting out on your kitchen counter, waiting for anything to happen to it.

Due to the fact that there are only two people living in our home (the dogs follow a paleo diet), we frequently have stale bread on hand.

These were the remaining pieces of a rustic Miche round that I purchased from Easy Tiger, which is my go-to bakery.

I just now discovered that I described them as “day old,” when in reality, these shreds had been sitting about for a good number of days. Perfect panzanella bread.

This is a recipe that would work wonderfully on the barbecue… You could toast the bread and cook the peppers at the same time. You could even barbecue the kale.

Cooking mine in a pan was not only more convenient for snapping pictures, but also necessary due to the extremely high temperatures outside.

I finished them off with a touch of sherry vinegar and a few pinches of smoked paprika so that the flavor would be enhanced even further.

Toss everything together, then set the salad aside for a few minutes so it can get lovely and juicy. Serve alongside whatever else you have on the grill!