Rich and Savory Thanksgiving Stuffing Recipe (Made with Fresh Herbs) 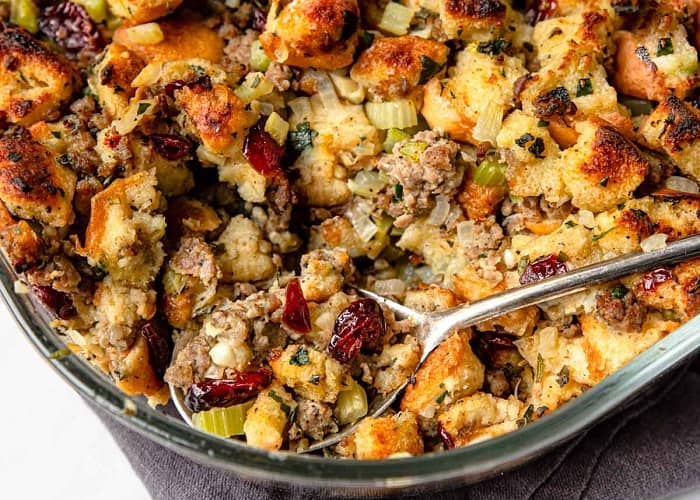 The best stuffing for Thanksgiving! It’s rich and savory, with fresh herbs, celery, butter, and leeks, and it’s based on my family’s original recipe.

It was simple and wonderful, made with onion, celery, and dried herbs. On top was a crisp, golden crust of bread, with a delicious, gooey middle beneath. Every bite was bursting with rich, delicious flavor.

Every year during Thanksgiving, my mother makes this homemade stuffing dish for my family.

Because I adore it, I decided to create my own version to share with you! I only made a few changes: I used leeks instead of onions, fresh herbs instead of dried herbs, and crusty sourdough bread.

I was overjoyed with the results, but I was anxious to hear what my mother thought. I let out a great sigh of relief when I told her about it last weekend.

She looked up after a few nibbles and exclaimed, “You took our stuffing recipe and improved it!” I sincerely hope you enjoy it as much as we do.

Ingredients for the Stuffing Recipe

This stuffing recipe is more conventional than the ones I’ve previously published (see here and here). It’s made with the following ingredients:

This stuffing recipe is incredibly easy to prepare! This is how it works:

To begin, tear the bread. Yes, shred the paper with your hands rather than cutting it with a knife! I enjoy how the rough edges capture the melting butter and herbs, and I prefer the sight of ripped bread to flawless tiny bread cubes. Place the bread in a fairly large basin after it has been torn.

Cook the leeks next. In a large skillet over medium heat, melt the butter. Sauté for 5 minutes, or until the veggies soften, after adding the leeks, celery, garlic, salt, and pepper. To avoid browning the leeks, I reduce the heat to low halfway through.

After that, season the bread. Add the fresh herbs after pouring the leek mixture over the toast. Toss everything together with your hands, covering the bread in butter and herbs.

Toss the bread with 1 1/2 cups of broth once more. Toss in the eggs one more. The bread should be quite wet at this point. If it’s still a little dry, add another 1/2 cup broth.

Lastly, bake! Place the bread mixture in a greased baking dish and layer it thickly and evenly. Drizzle olive oil over the top, cover, and bake at 350° for 30 minutes.

If you like your stuffing to have a crispy top like me, cover the dish and bake for another 5 to 10 minutes.

Recipes for the Best Stuffing

The Thanksgiving side dish is this classic stuffing recipe! Rich, savory taste comes from leeks, celery, and fresh herbs.