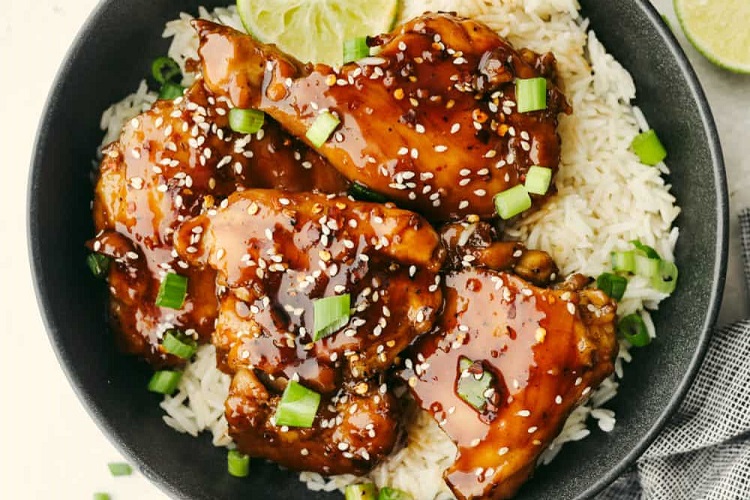 If you’re new to cooking, this Sticky Ginger Soy Glazed Chicken is a terrific place to start because it’s so simple.

My favorite thing to do with a dish is to reduce it to its simplest form while retaining the most flavor.

I’ve created a lot of Asian-inspired marinades and glazes in the past, but this time I stripped down my marinade to its base essentials to prepare this Sticky Ginger Soy Glazed Chicken, and guess what?

It’s by far my favorite. Simple is the best and I promise you’ll be pleasantly surprised by the flavor.

CAN I USE CHICKEN BREAST IN THIS RECIPE?

This easy marinade may be used on chicken breasts or thighs, but I like thighs because they’re usually already cut into small, manageable pieces that cook quickly and remain juicy and delicious.

If you’re using chicken breasts, I recommend chopping them into smaller pieces or smashing them thin to ensure maximum marinade contact and speedy cooking.

STICKY GINGER SOY GLAZED CHICKEN CAN BE COOKED OR GRILLED

Cook the Sticky Ginger Soy Glazed Chicken in a skillet or on a grill once marinated. A grill will certainly produce nicer browned edges and caramelized sugars, but a skillet is so simple.

And I prefer simplicity.

A simple marinade transforms into a sticky and delectable glaze in this Sticky Ginger Soy Glazed Chicken.

*According to FDA food safety guidelines, it is okay to cook old marinades as long as they reach a complete boil. To kill bacteria, this thoroughly cooks the marinade, just like the raw chicken that was in it.

The marinade used should be prepared right away and not kept uncooked for subsequent use.

If you’re worried, make a double batch of the marinade and use half for the chicken and the other half to reduce in a small saucepan before brushing it on.

You can serve this Sticky Ginger Soy Glazed Chicken with jasmine rice and a cucumber-mango salad.

What is a climatarian diet? Is it really ideal and healthy?
Sore throat: Which foods are best for soothing and nutrition?