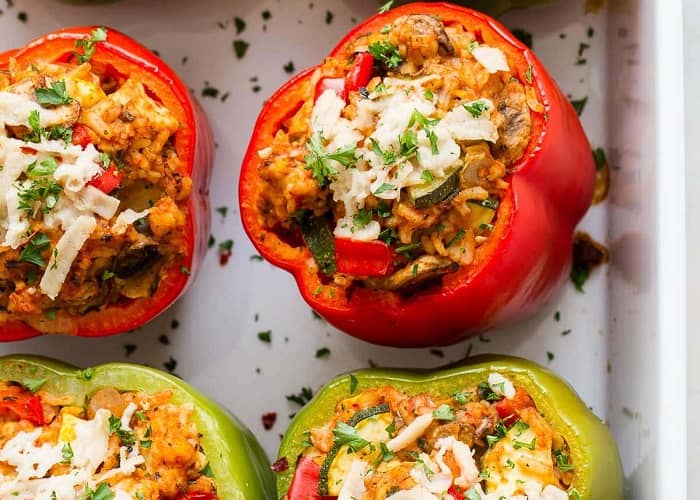 These stuffed peppers aren’t like the ones your mother used to make. They’re meatless and bursting with flavor.

Yes, they’re cheesy as pictured, but they’re also delicious without it. These peppers can simply be made dairy-free or vegan.

Although most stuffed peppers are made with Italian flavors, I used a different approach. I was inspired to use pinto beans, cherry tomatoes, cilantro, lime, chili powder, and cumin, as well as other Mexican ingredients.

I could eat the filling as a side dish since it’s that delicious! Although these peppers take some time to prepare, each component is simple to prepare.

Cutting the peppers in half from the stem end down through the base is the key to making wonderful stuffed peppers.

Pre-roast the halves until soft and a little browned around the sliced edges. Its taste is concentrated, and its texture is perfect—not too crisp, but not crumbly.

Cook some extra brown rice for yourself while you’re at it. Then, say, Extra Veggie Fried Rice or any of these rice-based meals, you’ll be one step closer to dinner tomorrow night. A big thumbs up!

The whole recipe may be seen below, but here’s the gist:

These peppers are a fantastic dinner to make ahead of time. Cooking the rice and prepping the peppers will give you a head start. Alternatively, you can build them completely and then cover and refrigerate them for later. This would be an excellent dish to deliver to a friend with baking instructions (about 12 to 15 minutes at 425 degrees Fahrenheit).

These stuffed peppers are a complete meal in and of themselves, with substantial grains, vegetables, and beans for added protein and fiber. Here are some suggestions for side dishes to go with the meal:

My favorite Mexican recipes inspired these vegetarian stuffed peppers! Roasted bell peppers are packed with a savory mixture of pinto beans, brown rice, and fresh vegetables, then topped with melted cheese (optional). This recipe makes 8 stuffed peppers, which serve 4 as a main meal or 8 as a side dish.

How to make Gazpacho? (Bursting with Fresh Flavors)
How to make Monster Cookies? (Made with Wholesome Ingredients)