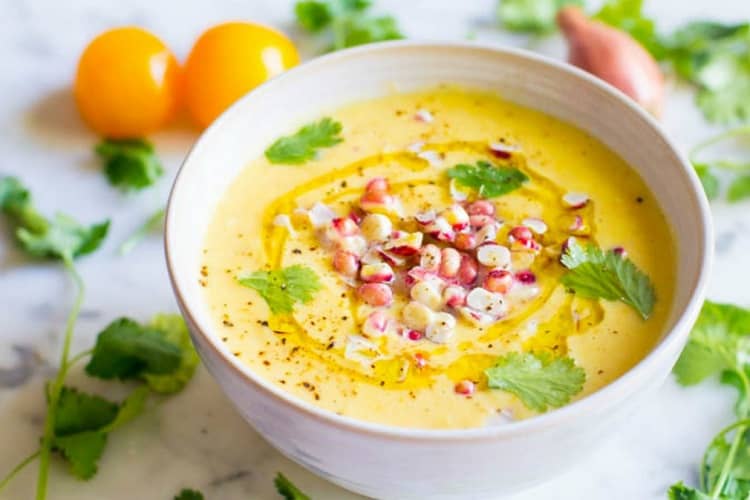 Both gazpacho and sweet corn are at their peak quality during the summer months.

Blending together corn, tomatoes, peppers, oil, vinegar, salt, and cucumber is all that’s required to make this simple chilled soup.

Recently, Jack was on his way to the suburbs to pick up a few items from my parent’s place, and I requested him to make a pit stop at The Farm on his way back home.

In my opinion, the most delicious sweet corn can be found at a quaint small farm stand in Darien, Illinois called The Farm.

When I was a kid, my mother would frequently bring home dozens of ears of corn at once, and the five of us would sit on the back stoop and shuck it.

The process of peeling back one pliable paper-like layer at a time took an interminable amount of time, and it resulted in a silky mess. We had a lot of fun toiling away for what I can see clearly now was a substantial amount of corn.

When Jack arrived, he immediately called me to let me know and informed me that “they’re selling corn by the half dozen, so you want me to purchase one bundle of six right?”

I responded by saying, “No, no, of course not; buy two bundles!” Because my mother has always bought maize for our family during the harvest season in this manner, I blurted it out without thinking because I couldn’t help myself.

It wasn’t until he returned home with what seemed like a million kernels of corn that I realized that he and I are only a family of two, and I had no idea what in the earth I would do with ALL of this corn. Until then, I had no idea what to do with it.

To get things started, I prepared the following gazpacho:

Since the weather is still nice, I’ve decided that eating gazpacho is acceptable in my book (or, on my blog). Simply place all of the ingredients in a blender and process them until smooth. This recipe couldn’t be any simpler. The ingredients for this soup are a raw corn kernel, an olive, a yellow pepper, a yellow pepper heirloom tomato, a cucumber, olive oil, and sherry vinegar.

I prefer to set aside a few corn kernels to use as a garnish on top of the soup along with chopped basil, cherry tomatoes, and micro greens.

It’s a really light soup, so if you serve it with pieces of avocado toast, you’ll have a meal that’s both energizing and not too heavy for lunch or dinner.

Note that soups typically taste better on the second or third day after being made since the flavors have had more time to meld together after being stored in the refrigerator.

This soup is no exception; in fact, as I type this (on day 3), I have just finished eating the leftover soup, and it turned out to be much more cohesive and flavorful than it had been on the first day.