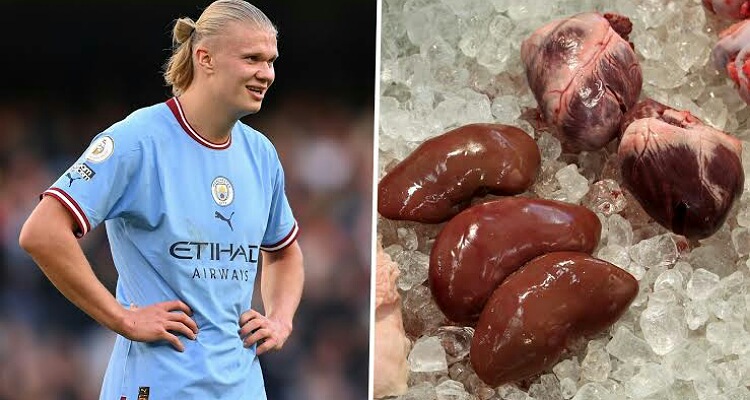 Often, celebrity fans want to know what diet their favorite stars eat. And quite a number of times, one does get surprises in the answers. The same happened when people came to know what Erling Haaland, Manchester city striker consumes daily.

Erling Haaland and his documentary

Erling Haaland is the striker at Manchester City team. He scored his 20th goal of the season this year. There is a documentary about him with the title: Haaland: The Big Decision. It is a Norwegian series and in it Erling talks about his food and eating habits. It is quite bizarre and cannibal like.

People and his fans would be surprised to learn that the Norwegian footballer, Erling has heart and liver at meals. The total calories he consumes in a day is huge: around 6000 calories per day. He also has special water daily. This water is cleaned through a complicated filtration system before he consumes it. On it, he said:

“I have also started to filtrate my water a bit. I think it can have great benefits for my body.”

In the series, there are revelations about his eating habits. He states that he looks at the sun in the morning after waking up. Erling says:

“The first thing I do in the morning is to get some sunlight in my eyes — it is good for circadian rhythm.”

He shows off pieces of liver and heart got from his butcher and says:

“You (other people) don’t eat this, but I am concerned with taking care of my body.”

“I think eating quality food that is as local as possible is the most important.”

“People say meat is bad for you but which? The meat you get at McDonald’s?”

“Or the local cow eating grass right over there? I eat the heart and the liver.”

Heart and liver are high sources of protein, vitamin B, iron, phosphorus, copper as well as magnesium.

This film was shot before he joined Manchester City team. He was changing team from Borussia Dortmund.

As he is taking tour of the training ground with his chefs, he tells them:

“You should be my favourite people.”

He takes ham and cheese omelette from them to eat. Erling is just 22 and previously he had revealed that he loves doner kebab pizza. The lasagne made by dad Alfie is also an integral part of his daily diet.

Erling had a personal trainer at Borussia Dortmund called Erase Steenslid. He had jokingly revealed:

“Erling is always the closest to the buffet and his plate is literally a mountain of food.”

His father Alfie was also earlier playing for Manchester City. He had disclosed that his son got the inspiration to eat in a healthy way after he saw what Cristiano Ronaldo had at meals. Alfie said:

“He was told a story by (ex-United player) Patrice Evra about a lunch he had with Ronaldo and Cristiano had fish, nothing else. Erling now tries to do the same.”

Erling has a towering height of 6 feet and 4 inches. He loves ice baths. Moreover, he uses glasses to filter out blue colour light in order to ensure good sleep.