How to make Strawberry Tabbouleh? (Ideal meal for Picnic) 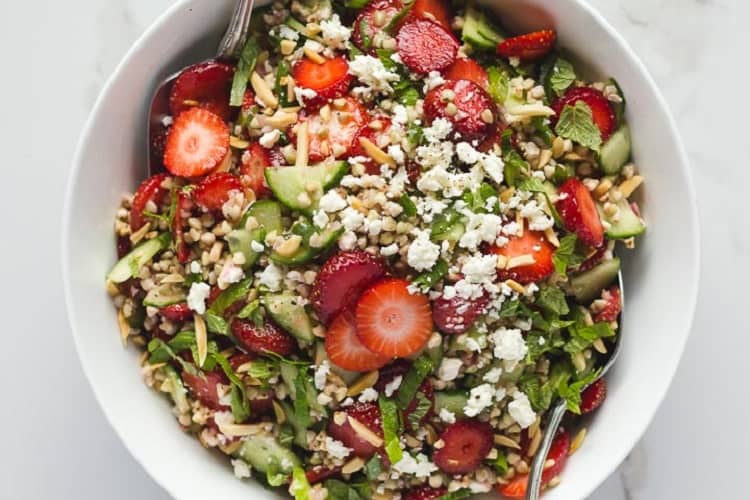 The fact that it is both vegan and gluten-free makes it an excellent choice for a picnic.

I could tell after posting my list of favorite spring cookbooks that this is the book you’ve all been waiting for, and I’m happy to report that Sara and Hugh Forte’s latest book, Sprouted Kitchen Bowl + Spoon, is one that doesn’t let you down in the least.

The photographs are, without a doubt, breathtaking, and the food, well, just looking at it makes you want to grab a spoon and start digging in since everything, including this tabbouleh recipe, appears to be so amazingly colorful and delectable.

This recipe for tabbouleh, which is located on the back cover of the book, came to my attention despite the fact that the book has been resting on my desk for quite some time, along with a plethora of papers, books, and other items that contribute to an untidy desk.

Because I adore tabbouleh, strawberries, and salads that combine sweet and salty components, I knew I had to give this tabbouleh recipe a shot…

Instead of putting my own touch on things, I decided to go completely off the deep end and just follow the tabbouleh recipe precisely as it was written by Sara. (Except that I was out of parsley, so at the very last second I chopped up some basil instead).

I don’t use bulgur very often in the kitchen, but I really should because it’s so simple to prepare and I really like how it has a more subdued flavor than quinoa.

It goes without saying that you should substitute quinoa for the rice called for in this recipe if you are avoiding gluten.

Feta is not required in this tabbouleh recipe; but, she did make a specific remark about how her “resident taste tester would say it’s definitely vital,” so I decided to include it anyway.

The picturesque setting of a picnic that ought to have been in the backdrop was the one and only feature that was noticeably absent from this image.

Last night for dinner, we had this salad, but it would make an excellent dish to bring on a picnic as well.

Other recipes that I want to try are the Hippie Bowl, the Tahini Kale Slaw with Roasted Tamari Portobello Bowl, and this Mixed Berry Tiramisu.

This recipe for Strawberry Tabbouleh is courtesy of Sara Forte and can be found in her book The Sprouted Kitchen Bowl + Spoon. It is full of vibrant color and has just a hint of sweetness, making it an excellent choice for a summer picnic.

How to make Kohlrabi Slaw? (Crisp and Refreshing)
How to put together a Crudité Platter? (Full of sweet and savory components)