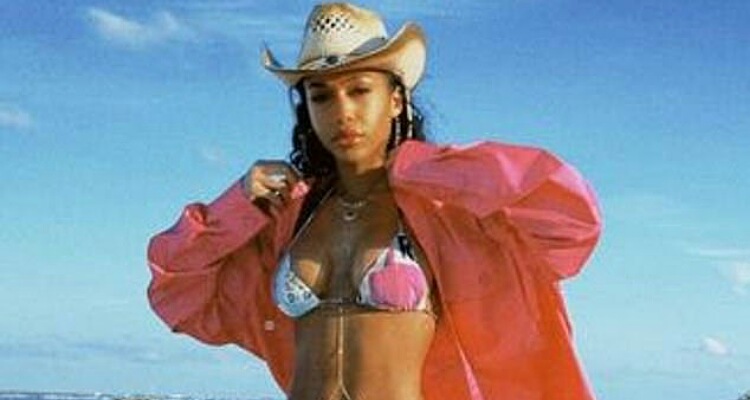 Lori Harvey, 25, daughter of Steve Harvey wanted to lose weight. She revealed on TikTok that she exercised and cut her calories to achieve weight loss.

But Lori defended herself. Know how she tackled the situation.

Lori Harvey and her revelation on TikTok

Lori Harvey is 25 now. She is the daughter of the famous Steve Harvey. She is dating her boyfriend actor Michael B. Jordan. The two have immense love for each other.

And during this romantic phase, Lori put on a lot of weight. She gained 15 lbs. And to lose this weight, Lori started a low-calorie diet and Pilates and workout sessions.

Lori posted a video on TikTok to reveal the tactics that she used to lose excess body fat. She had a strict diet regime of 1200 calories per day.

This is lower than the recommended calories for a young adult female. She also stated that she did Pilates five to six times a week along with cardio workouts to be able to lose weight.

“‘Everyone’s asking what it is I specifically did to get my body to this point.”

“When Mike and I got together I gained like 15 pounds of relationship weight and it was horrible. None of my clothes fit, it was not OK.”

“When I was trying to drop weight, I was working out like five, six times a week and for the first month and a half I would even do it two [times] a day.”

“I was in a calorie deficit – I think I was maybe consuming like 1,200 calories a day max.”

“I wasn’t on a specific eating regimen I was just trying to do meat and veggies and minimal carbs.”

After the morning Pilates, she would run on the treadmill for half an hour. Further, she said:

“I would do that or I also like to do a hike or go running the stairs, some type of cardio.”

Some of her fans were thrilled to learn her health secrets. But some were upset that she went on such a low calories diet.

What disturbed them most was that she was sharing this wrong thing on social media. Some warned her of the dangers of such a strict diet of low calories while others slammed her. One fan advised:

And one of them wrote:

Some supported her and answered on her behalf to the backlash. And Lori also defended herself saying:

“It worked for me and my body, everyone is different.”

How to Cook a Sweet Potato in the Microwave
Make Tomato and Spinach Pasta, Creamy, Budget, Ingredients