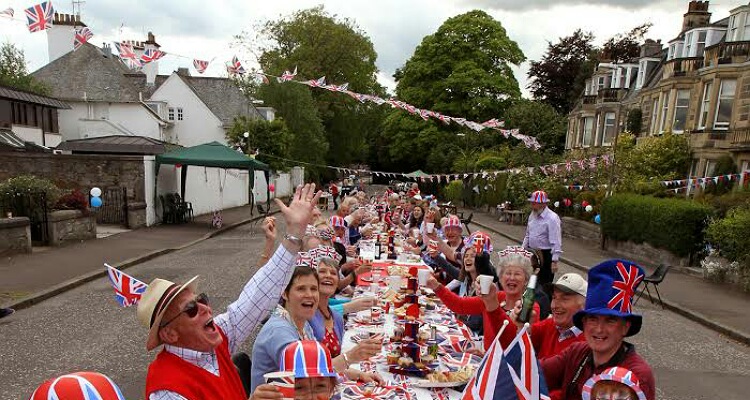 2 to 5 June 2022 would be the celebration days and whole of the UK is in a frenzy. So what all is expected over this long 4 day weekend for the British citizens? Let’s look at it.

She was heir apparent and her coronation happened on 2 June 1953. And now it has been 70 years of her reign. It is a milestone since none of her predecessors were for so long on the throne. She is the first to complete 70 years ruling England.

There is a long 4-day weekend and people are preparing for street parties, garden parties, and parades to mark this great occasion. Jubilee-themed foods are drinks are also flooding the market.

The big supermarkets such as Tesco and Sainsbury are already going with the mood of the people. There are loads of products there with British flavors and royal designs.

Special gin bottles, cakes with images of the Queen, Union Jack cookies, British gourmet popcorns are some of the many products on the shelves of this supermarket to commemorate the event.

Several big brands have launched new products in honor of the Queen. These include Popcorn Shed company that has a name due to its innovative flavors and new approaches to classics.

They have newly launched two British themed flavours that are Cherry Bakewell and Strawberries and Cream gourmet popcorn.

Parties on the way

The weather in England is fairly good this week. Hence people are going to indulge themselves in parties in the streets and gardens.

Hence there is going to be an increased demand for barbecue food, sweet dishes, soft drinks and alcohol. It has boosted the sales of these products.

Marks and Spencer has stated that 40% of the people will have a street party. Co-op said that 39 million adults would go for it. The celebrations have lifted people’s moods and confidence.

They are going to put aside all their financial and health worries and enjoy thoroughly. They plan to immerse themselves in merriment this weekend.

The food and drinks industry was reeling under the pressures brought about by several lockdowns, Brexit, soaring prices, and packaging shortages.

The strict regulations, consumer behavior changes, and technological advancements created challenges for this industry and it has been difficult to cope with them.

These jubilee celebrations are like a mini boost to the trade that was required. It will be a short-lived boost but it will bring cheer to the industry and people.