What are blue foods? Their health and planet benefits! 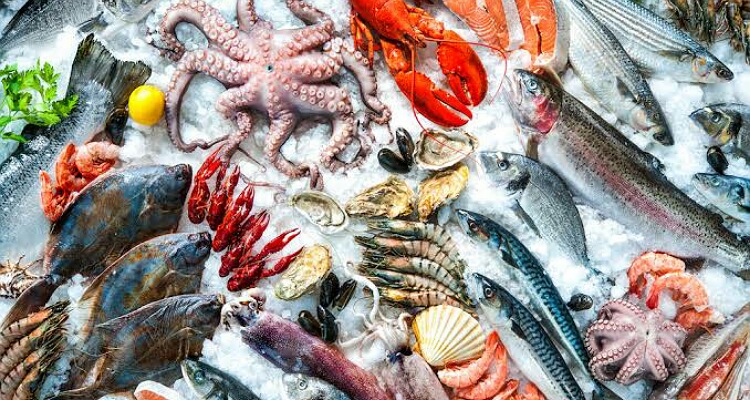 Blue foods are more sustainable. They are less likely to cause any negative impact on the environment and climate. But what are blue foods?

And how can these foods be made more environmentally sustainable?

What are blue foods?

Blue foods are not blue foods. They are foods that originate in the oceans, seas, rivers, and lakes. Therefore they are aquatic or marine or freshwater foods.

And they include animal forms as well as plants and algae. These foods are caught or procured from natural water bodies or are cultivated (cultured) in the marine or freshwater environment.

Compared to terrestrial foods, these foods are higher nutritional benefits. And they are also more sustainable. Therefore, they benefit humankind as well as save the planet.

They are rich sources of omega-3 fatty acids and minerals and vitamins. Their carbon footprints are lower and hence they are less damaging to the environment.

They utilize less water and land. These aquacultured foods include salmon, carp, catfish, shellfish, and tilapia.

The largest traded foods in the world are blue foods. Around 40% of Americans live along the coast. Fish is their staple food.

And fish is an important part of the diets of many other people including those who reside along river banks. Globally, capture fisheries or wild-caught fisheries were around 96.4 million tons in 2018. And this and its consumption is rising.

But one out of three fisheries is functioning at an unsustainable level. This may affect the future of this industry. Seafood is a good option to overcome global malnutrition and bring it down. Hence, these fisheries should be improved and made sustainable. Their greenhouse gas emissions should be brought under control. And ocean destruction should be halted. Overfishing is posing a risk and could slowly erode its potential. How to conserve this ocean food ecosystem?

More and more fisheries in the world are coming under the gamut of third-party certification. That ensures that while fishing, the corporate fishing companies follow the rules and regulations of fishing to make it sustainable.

More than 75% of consumers feel that they rely on such third-party certification. The small-scale fishers should also come under the umbrella of such certification.

Marine Stewardship Council (MSC) provides this certificate. Training must be provided to the small-scale fishers on how to go about reaping the benefits of the sea in the long term. Additionally, people can help by choosing blue foods with this certificate.

Read more: What is a raw food diet? What are its advantages and risks?

More research in this direction is useful. For instance, the Oregon Department of Fish and Wildlife did a study in 2014.

It showed that putting LED lights on shrimp nets minimizes the unwanted catch of the endangered eulachon or candlefish by 10 to 20%. The governments of the world can promote the consumption of blue foods especially those that are certified.