What is a zodiac diet? Sally Kirkman talks about it on This Morning show!

Home /Healthy Eating/What is a zodiac diet? Sally Kirkman talks about it on This Morning show! 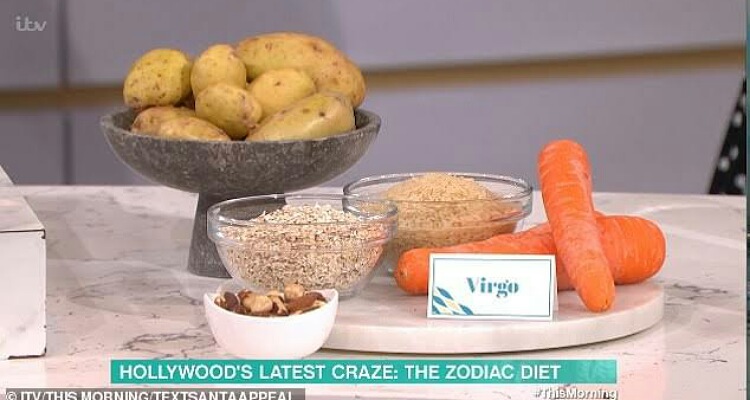 Zodiac diet? This is something new that a food astrologer, Sally Kirkman brought up on the ITV show This Morning.

She stated that people should eat based on their zodiac signs to get health benefits and stay fit and healthy. But the viewers are not convinced and call it ‘rubbish’.

On the ITV show This morning, Sally Kirkman talked about the zodiac diet.

She told the show hosts Holly Willoughby and Phillip Schofield that a person should consume foods based on which month and day of the year he or she was born.

Thus, she spoke about a fusion of the zodiac signs and diet. This is the zodiac diet. Popular TV host, Oprah Winfrey and PETA (animal rights activist and environmental group) also advocate it.

The latter has published a book to guide interested people on how to go vegan based on their zodiac signs.

Talking about the history of this diet, Sally revealed:

“There’s a renaissance of it, I think it’s very popular in Los Angeles at the moment. No surprise there!”

“But this goes back hundreds, if not thousands, of years, to the birthplace of astrology – ancient Greece.”

“Then in medieval times, that’s when it was at it’s peak, the link between astrology, herbs, spices and foods. If you were a doctor, you were also a herbalist and astrologist.”

How to eat as per your zodiac signs?

Sally spoke in depth on good consumption based on the signs of the zodiac. She said:

“There are some dos and don’ts with each of the star signs.”

Sally elaborated that Aquarians go for fad diets. They are eccentric eaters. Adding further, she said:

“Also I think what’s important for Aquarius, is it’s about the circulation so it needs to be light foods. Chicken breasts, white fish, tomatoes and mushrooms. Light broth. Pretty healthy diet.”

Ariens should consume hot and spicy such as chillis, peppers, ginger, garlic, and radishes.

For those with the Virgo sign, Sally said that they should have carrots, almonds, and potatoes. She said Pisces people are romantic, dreamy, and sensitive. On this sign, she added:

“Two planets are linked with it, Neptune – god of the sea so seafoods and liquids. Like juicing diets and vitamin drinks. It’s a good one to take supplements as well.”

“They do have an addictive nature as well, it’s a boundless sign.”

“They make really good chefs and tend to make good gardeners. All the foods associated with Taurus are like the fruits, asparagus, cloves and spices.”

For Gemini, she said they like snacking. Therefore, they should have tapas and mezze, licorice and fennel, and foods like beans. Libra people possess a sweet tooth and can enjoy cupcakes and cherries.

The show viewers disagreed with Sally and called her to talk rubbish. One wrote:

“The Hollywood craze that will be forgotten about next year.”

And a fourth questioned the show makers:

“Should This Morning really be promoting a fad diet?”