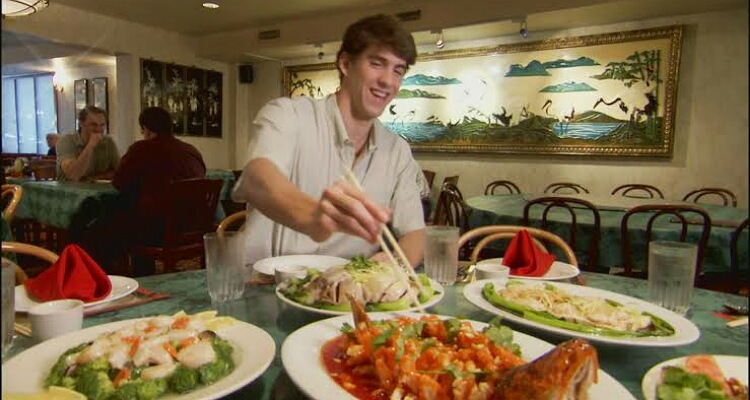 Michael Phelps, the famous US gold medalist swimmer has retired now. But during his high career days, he was in intensive training sessions.

And for this, he had to consume a high calories diet daily. It amounted to 10000 calories per day. This is not suitable for the common man, but for Michael, it worked. More below on his career, diet, and retirement.

Michael Phelps and his career

Athlete Michael Phelps hails from Baltimore, Maryland, USA, and is now 37 years old. His nickname is the Baltimore bullet.

He won 8 good medals in swimming at the 2008 Olympics in Beijing, China. In total, he has 28 medals to his credit and 23 of these are gold medals. He had overthrown the record of Mark Spitz who in 1972 had won 7 gold medals at the Olympics.

Michael is now retired and married with three children. Hd took retirement in 2016. And people wondered how this great athlete managed so much of energy and fitness for the practice sessions.

It seems that the secret was his 10k calories diet. It seems incredible but true.

The athlete from the USA used to eat an enormous amount of food during those days. He had said after his 11th Olympic gold win:

BBC revealed the athlete’s daily meal plan. His daily calorie intake amounted to 10k. This is huge compared to 2000 to 3000 calories in a healthy adult.

For breakfast, he used to have 3 fried egg sandwiches, with cheese, tomatoes, fried onions, lettuce, and mayonnaise.

There were also three chocolate chip pancakes, 5 eggs omelet, 3 slices of French toast that was sugar-coated, a bowl full of grits, and 2 cups of coffee.

Later, his lunch consisted of 500 g of enriched pasta, two large sandwiches of ham and cheese, mayonnaise, and energy drinks.

At night dinner, he used to have another 500 g of pasta with carbonara sauce, a large pizza, and energy drinks. Dietitian Barbara Lewin opines:

“Health-wise, if he were eating like this long-term, he’d probably be having to see a cardiologist regularly,”

But Michael needed it and Barbara adds:

“Nine out of 10 times, the reason an athlete doesn’t reach their personal best is because they’re not getting enough carbohydrates and that’s what your muscles need for food,”

All the high proteins and fats and carbs that Michael used to consume used to burn out during his vigorous training sessions.

Read more: The healthiest beer in Australia: with low alcohol and low calories!

Now Michael does not need so much energy and calories. He has other responsibilities. Therefore, after retirement from active swimming, Michael now eats lots of veggies.

He has smoothies with almond milk, spinach, cacao nibs, and figs during breakfast. He has meals with his family and includes a lot of salads in them. He told GQ: